In this episode Nate expands on the Circled Dot as well as explaining why most refuse Truth.

In this episode Nate further explains the Circled Dot symbol, putting a finer point on differentiating between the pure form of the symbol and what other symbols it later became through history. The Circled Dot is a very valuable symbol to learn and understand for the seeker of Truth. Nate helps put forth the simplicity of this symbol through the understanding of principles and important aspects associated with the Circled Dot.

​​In this episode Nate shares some very helpful knowledge for the seeker who wishes to learn how to find and understand Truth through symbol by comparing similar symbols that have been discovered and used throughout history. The intent of this show is to inspire the viewer to see the general shape/form and meaning to be able to then discover the simple and pure essence of a symbol, especially the “Circled Dot.”

​​In this episode, Nate describes his week long dopamine detox and how it helped motivate and focus his mind better. He also gives a brief description of the logo of Outcasting as well as what Outcasting means. There are a few updates for this show and the future of the CubbyWhole podcast, so stay on the lookout for more content!​

In this video, Nate discusses the correlations and correspondences of the Trivium process with the symbol of the equilateral triangle with the eye in the middle. This episode endeavors to help the student connect some very deep aspects of all that ties into the spiritual number 3 or equilateral triangle symbol. How far does this sacred science go? And what does it really reveal about our reality? Some of the topics talked about are the illuminati, consciousness, trivium, gender principle, triune brain, symbolism, correspondence, spirituality and much more.

#007 “THE IMPORTANCE OF CLARITY OF MEANING”

In this episode Nate explains the importance of being clear with words and definitions, especially when delivering critical information of Freedom. He also covers the way in which certain words are used to confuse us from seeing the Truth and how important it is to be aware of this type of manipulation. Words like Apocalypse, Anarchy and Occult are some of the words explained which are very critical to understand for anyone searching for Truth.

In this episode Nate gives a very basic breakdown of the Quadrivium; Truth Discovery Method which is part of the 7 Liberal Arts. He gives an etymological definition as well as covering the 5 senses that bridge the Trivium and Quadrivium in order to help further discover Truth.

In this episode, Nate shares the Truth Discovery Method known as the Trivium. He breaks down the 3 Trivium models including the Classical, Esoteric and Modern. Anyone who is on their quest to discover Truth will find great value with this Spiritual Tool.

In this episode, Nate attempts to help bring more clarity to the meaning of “That Which Is” aka Truth. A simple yet highly misunderstood concept that will help any serious student on their path towards a more luminous mind and essentially Freedom.

In this episode, Nate talks about the dynamic of Spirituality and how it plays an important part of the evolution in the human species as well as the painful reality it can and will reveal. Honesty is a hard lesson for most and it is what helps the student face the hardest parts of the apocalypse.

In this episode, Nate helps clarify the terms “Shoshin” and “Self Omniscience.” He explains the true open mind and the opposing highly dismissive attitude. Both descriptions are very important to observe and understand as the student of life.

#001 “BITS OF SCIENCE TOWARDS FREEDOM”

Nate gives a short explanation of his new show, explaining the subtitle ‘Bits of Science Towards Freedom.’ In this episode he covers the word science, knowledge, the science of Freedom and a brief example of the ruling elite that have and are dominating most human minds of this world.

‘Outcasting’ is a new solo show put together by Nate Kap; sharing ‘bits of science towards freedom’ aka important and critical knowledge explained in a short amount of time in hopes that it inspires others to go further in their studies and help create a more free and moral world. The topics shared on this show consist of but are not limited to Human Behavior, Natural Law, The Occult, Esotericism, Anthropology, The Ancient Egyptian Mythos, Symbolism, The Mystery Traditions, Astro-Theology, Green Language, Words and Definitions, Principles, Slavery, The Science of Freedom, Consciousness and much more. These shows can be found here, Rumble, Odysee and Cubbywhole.com/nate for now. Stay tuned for more!

These are a collection of Nate’s artistic esoteric expressions. They are a type of spirit ignited sacred science with encoded analogs for the subconscious EYE that reflect what’s taking place in our world. These pieces are archetypal creations with the intent to expand consciousness within and around the Self in which it operates. Art combined with occult knowledge has the potential to accelerate the student’s ability to SEE into the hidden realm that words may not be able demonstrate. Much can be revealed to those who ruminate on these images with the intent to want to know and understand.

Nate gave his presentation “Relumination of the Imagination” over a Zoom webinar at the S.E.E.D. 4 Growth conference, May 15th, 2021. Many people may not be familiar with the unseen realm of the universe and the many important beautiful discoveries made there. Amongst us is that very place in which he has found highly intriguing and inspiring, especially knowing how to navigate and connect within it. This presentation endeavors to guide the viewer’s imagination into a realm that grants an intelligent scientific reflection and unfoldment of the human soul. It’s very condensed and he will have a fuller demonstration in future CubbyWhole podcasts. The goal of this presentation is to restore, regenerate and/or reluminate the ancient wisdom of the imagination back into the hearts of man and help inspire the restoration of the great sciences that have been lost from Ancient Egypt.

ZIP FILE WITH SLIDES FOR THIS PRESENTATION ROTI

This presentation, “Earth Brain And The Corresponding Symbolism” was given live in Rutland, Ohio at the “SEED 3-Sprout” event in Skatopia. The topics covered are: Consciousness, Symbolism, Hermeticism, Cymatics,  Freemasonry, Astrotheology, Earth Brain Religions, Subversive Symbolism,  Polarization Dialectics,  Hero Cults, The Gavel, The Cube, The Circled Dot and much more. The mission of this presentation is to help serious students who seek to understand the dialectics that control and ultimately have been separating humanity for thousands of years. If one brings enough knowledge and understanding, one will reveal some of the deepest roots in the cosmos and ultimately have the key to understanding higher degrees of origins and evolution of religion.

Nate Kap’s webcast presentation titled “Rising Up Right; A Higher Direction” is a followup demonstration to his first presentation, “Rising Up Right.” He decided to put a finer point on a few topics that he felt are very important in order to understand the collective condition humanity currently finds itself in. Nate Kap covers Natural Law, the Moral Compass, the Triune Brain, Consciousness, Base Desires, Green Language, Toxic Frequencies, Symptoms, Causes, Trends, Contradictions, Order-followers, Sacred Feminine, Apathetic Selfies, 2nd Amendment, Sacred Animals, Environmentalism, Justifications, B12, Social Anxiety, Lab Meat, important Solutions and much more. All critical things to understand, especially how they interact with each other both within and around us.

This is a (shortened version) live presentation on the de-coding of the 2016 movie, Doctor Strange(slides only) that Nate gave at the S.E.E.D. 2 Germinate event in Rutland, Ohio at Skatopia on May, 6th 2017. He gave a very deep esoteric and conscious breakdown of the many allegories within this story while covering the brain components, symbolism, color, hero journey, rituals, synchromysticism, inner work, Will, ego, and many other aspects. The partial goal of putting this lecture together was in the hopes that he can reach those who want to understand depths of hidden esoteric sign language within cinema. He hopes that this presentation inspires you and helps you see further into the important mysteries. Watching and listening to the whole presentation is the only way to find true value.

This is a short presentation by Nate Kap, on the breakdown and understanding of the basic allegories within this artistic piece of sacred science called the “Entered Apprentice” of the “Temple of Solomon.”  This presentation breaks down the sacred feminine and sacred masculine principles within this trestle/tracing board and how they can be brought together in unison by bringing balance and equilibrium into our minds and hearts through understanding and acting on this sacred science. Some of the key points covered are The Pillars, The Geometers Tools, Jacob’s Ladder, The Checkerboard Floor, consciousness and more.

This presentation is a short esoteric breakdown called “Flooreyed.” This “Flooreyed” art was created by Nate with the purpose of showing green language or word play that reveals an archetypal current condition of humanity. It’s a way of showing what the state of humanity seems to be in as an expression that came from understanding Freemasonry in conjunction with the actual effects of fluoride on the human psyche. Prerequisites to understanding this piece are; behaviors and components of the brain, The seven Hermetic principles of Natural Law, Generative principle, pillars of the 1st degree trestle/tracing board of the Temple of Solomon(freemasonry), the Pineal Gland(third Eye), fluoride side effects, Green Language, Allegory, Consciousness, Symbolism, Sign language(not hand gestures).

In this video, Nate talks about the 3 major beliefs that are holding most of humanity back in consciousness towards further enslavement.

In this episode Nate was invited on the Critical Introverts show to discuss what it means to be Authentic. 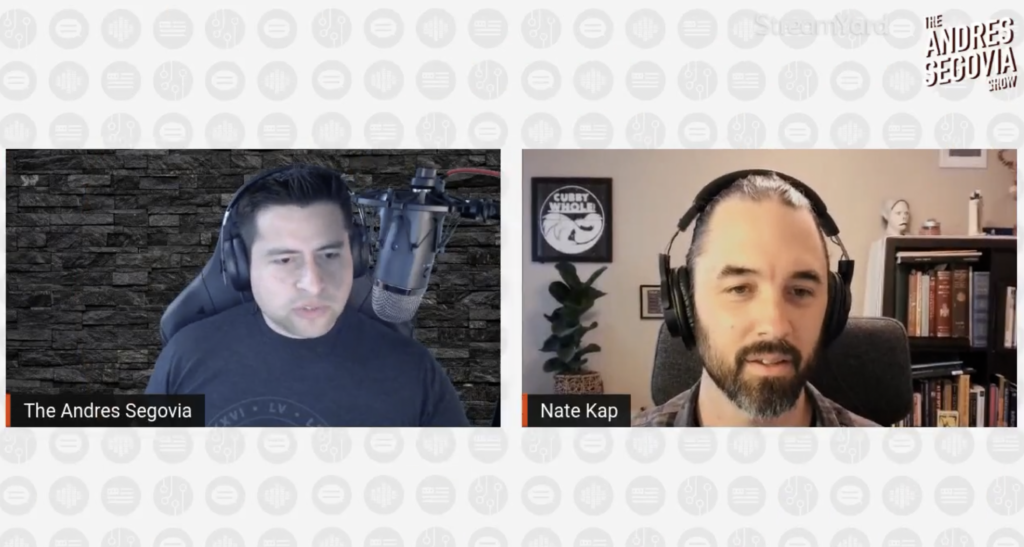 Nate was interviewed by Andres Secovia speaking on Natural/Gods Law, Objective Morality, Religion, Objective Truth and ways in which man can improve on relations with His fellow Brothers and Sisters. Click here to watch.

Nate was interviewed on the new ‘The Critical Introverts’ podcast show covering topics such as mind-control, inward division, individualism vs collectivism, dreams, SJW psychology and more. The title “opinion over knowledge” has to do with the overwhelming mindset of the masses that make their opinion and feelings worth more than knowledge and Truth. Learning about mind-control is the way in which we transcend our dualistic dogmatic beliefs that keep us divided. Recorded June 30th 2021.

On Tuesday, April 21st, 2020, Nate was given a really great opertunity to be on the new podcast show called, “I AM HUMAN” with hosts Efro and Gama. This was his first time ever being interviewed about most topics he’s actually passionate about which is Natural Law, Symbolism, Hermeticism, and Inherent Rights. These guys are really great people who are trying to bring important awareness to the veiled world. Please support these guys and check it out!! Their YouTube channel; @iamhuman.t

Nate is the Founder, Host, Editor and Designer of the CubbyWhole Podcast which can be found here.